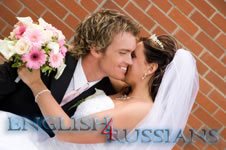 Jill and John got married. John thought this would be a "marriage of the 90's" - equal roles for equal partners. So, the first morning back from their honeymoon, he brought Jill breakfast in bed.

Jill wasn't impressed with his culinary skills, however. She looked disdainfully at the tray, and snorted, "Poached? I wanted scrambled!" Undaunted, the next morning, John brought his true love a scrambled egg. Jill wasn't having any of it. "Do you think I don't like variety? I wanted poached this morning!"

A man and his wife were having some problems at home and were giving each other the silent treatment. The next week the man realized that he would need his wife to wake him at 5.00 am for an early morning business flight to Chicago. Not wanting to be the first to break the silence, he finally wrote on a piece of paper, "Please wake me at 5.00 am."

The next morning the man woke up, only to discover it was 9.00am, and that he had missed his flight. Furious, he was about to go and see why his wife hadn't woken him when he noticed a piece of paper by the bed ... it said... "It is 5.00am; wake up."

A little boy was attending his first wedding. After the service, his cousin asked him, "How many women can a man marry?" "Sixteen," the boy responded. His cousin was amazed that he had an answer so quickly. "How do you know that?" "Easy," the little boy said. "All you have to do is add it up, like the Bishop said: 4 better, 4 worse, 4 richer, 4 poorer"

"Ever since we got married, my wife has tried to change me. She got me to stop drinking, smoking and running around until all hours of the night. She taught me how to dress well, enjoy the fine arts, gourmet cooking, classical music, even how to invest in the stock market," said the man. "Sounds like you may be bitter because she changed you so drastically," remarked his friend. "I'm not bitter. Now that I'm so improved, she just isn't good enough for me."

While enjoying an early morning breakfast in a northern Arizona cafe, four elderly ranchers were discussing everything from cattle, horses, and weather, to how things used to be in the "good old days. "Eventually the conversation moved on to their spouses. One gentleman turned to the fellow on his right and asked, "Roy, aren't you and your bride celebrating your fiftieth wedding anniversary soon?" "Yup, we sure are," Roy replied. "Well, are you gonna do anything special to celebrate?" another man asked. The old gentleman pondered this for a moment, then replied, "For our twenty-fifth anniversary, I took Bea to Tucson. Maybe for our fiftieth, I'll go down there and get her."

A couple was getting married, and it was only three days before the wedding. The bride calls her mother with some bad news. "Mom," she says, "I just found out that my fiance's mother has bought the exact same dress as you to wear to the wedding." The bride's mother thinks for a minute. "Don't worry," she tells her daughter. "I'll just go and buy another dress to wear to the ceremony." "But mother," says the bride, "that dress cost a fortune. What will you do with it? It's such a waste not to use it." "Who said I won't use it?" her mother asked. "I'll just wear it to the rehearsal dinner."

After Leslie brought home her fiance to meet her parents, her father invited the young man into his study to find out more about him. "What are your plans?" he asked Joseph. "I'm a scholar of the Torah," Joseph replied. "Well, that's admirable," Leslie's father replied. "But what will you do to provide a nice house for my daughter?" "I will study, and God will surely provide for us," Joseph explained. "And how will you buy her a nice engagement ring?" "I will study hard, and God will provide for us." "And children?" asked the father. "How will you support children?" "Don't worry, sir, God will provide," replied the fiancé. The conversation continued in much the same fashion. After Joseph and Leslie had left, her mother asked her father what he found out. The father answered, "Well, he has no job and no plans, but the good news is that he thinks I'm God."

During the wedding rehearsal, the groom approached the pastor with an unusual offer: "Look, I'll give you $100 if you'll change the wedding vows. When you get to the part where I'm supposed to promise to 'love, honor and obey' and 'be faithful to her forever,' I'd appreciate it if you'd just leave that out." He passed the minister a $100 bill and walked away satisfied. On the day of the wedding, when it came time for the groom's vows, the pastor looked the young man in the eye and said: "Will you promise to prostrate yourself before her, obey her every command and wish, serve her breakfast in bed every morning of your life, and swear eternally before God and your lovely wife that you will not ever even look at another woman, as long as you both shall live?" The groom gulped and looked around, and said in a tiny voice, "Yes," then leaned toward the pastor and hissed: "I thought we had a deal." The pastor put a $100 bill into the groom's hand and whispered: "She made me a better offer."

A couple had been married for 45 years and had raised a brood of 11 children and was blessed with 22 grandchildren. When asked the secret for staying together all that time, the wife replies, "Many years ago we made a promise to each other: the first one to pack up and leave has to take all the kids."

On their 50th wedding anniversary and during the banquet celebrating it, Tom was asked to give his friends a brief account of the benefits of a marriage of such long duration. "Tell us Tom, just what is it you have learned from all those wonderful years with your wife?" Tom responds, "Well, I've learned that marriage is the best teacher of all. It teaches you loyalty, meekness, forbearance, self-restraint, forgiveness -- and a great many other qualities you wouldn't have needed if you'd stayed single."

The child was a typical four-year-old girl - cute, inquisitive, and bright as a new penny. When she expressed difficulty in grasping the concept of marriage, her father decided to pull out his wedding photo album, thinking visual images would help. One page after another, he pointed out the bride arriving at the church, the entrance, the wedding ceremony, the recessional, the reception, etc. "Now do you understand?" he asked. "I think so," she said. "That was when mommy came to work for us?"

A young bride and groom-to-be had just selected the wedding ring. As the girl admired the plain platinum and diamond band, she suddenly looked concerned. "Tell me," she asked the elderly salesman "is there anything special I'll have to do to take care of this ring?" With a fatherly smile, the salesman said, "One of the best ways to protect a wedding ring is to dip it in dishwater three times a day."

My wife and I have the secrets to making a marriage last...

Two times a week, we go to a nice restaurant, a little wine, good food and companionship. She goes Tuesdays. I go Fridays. We also sleep in separate beds. Hers is in Florida, mine is in NY. I take my wife everywhere, but she keeps finding her way back.

I asked my wife, "Where do you want to go for our anniversary?"

"Somewhere I haven't been in a long time!"
So I suggested, "How about the kitchen?"

We always hold hands. If I let go, she shops. She has an electric blender, electric toaster, and electric bread maker. Then she said "There are too many gadgets, and no place to sit down!", so I bought her an electric chair.

My wife told me the car wasn't running well, there was water in the carburetor. When I asked where the car was, she told me "In the lake."

My wife is on a new diet. Coconuts and bananas. She hasn't lost weight, but BOY, can she climb a tree now!

She got a mudpack and looked great for two days. Then the mud fell off...

She ran after the garbage truck, yelling, "Am I too late for the garbage?" The driver said, "No, jump in!"