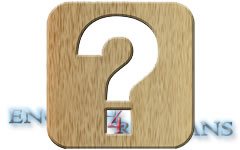 Almonds are members of the peach family.

The symbol on the "pound" key (#) is called an octothorpe.

An ostrich's eye is bigger than its brain.

The muzzle of a lion is like a fingerprint - no two lions have the same pattern of whiskers.

A pregnant goldfish is called a twit (кретинка).

The Ramses brand condom is named after the great pharaon Ramses II who fathered over 160 children.

Emus and kangaroos cannot walk backwards, and are on the Australian coat of arms for that reason.

Cats have over one hundred vocal sounds, while dogs only have about ten.

The word "сheckmate" (поражение) in chess comes from the Persian phrase "Shah Mat," which means "the king is dead."

The reason firehouses have circular stairways is from the days of yore when the engines were pulled by horses. The horses were stabled on the ground floor and figured out how to walk up straight staircases.

The first episode of "Joanie Loves Chachi" was the highest rated American program in the history of Korean television. "Chachi" is Korean for "penis."

A snail can sleep for three years.

Babies are born without kneecaps (коленная чашечка). They don't appear until the child reaches 2 to 6 years of age.

February 1865 is the only month in recorded history not to have a full moon.

If the population of China walked past you in single file (ряд, шеренга), the line would never end because of the rate of reproduction.

Our eyes are always the same size from birth, but our nose and ears never stop growing.

Did you know that crocodiles never outgrow the pool in which they live? That means that if you put a baby croc in an aquarium, it would be little for the rest of its life.

It is impossible to lick your elbow.

A crocodile can't stick its tongue out.

A shrimp's heart is in their head.

In a study of 200,000 ostriches over a period of 80 years, no one reported a single case where an ostrich buried its head in the sand, or attempted to do so (apart from bones).

It is physically impossible for pigs to look up into the sky.

On average, a human being will have sex more than 3,000 times and spend two weeks kissing in their lifetime.

More than 50% of the people in the world have never made or received a telephone call.

If you sneeze too hard, you can fracture a rib.

If you try to suppress a sneeze, you can rupture a blood vessel in your head or neck and die.

If you keep your eyes open by force, they can pop out.

Rats multiply so quickly that in 18 months, two rats could have over a million descendants.

Wearing headphones for just an hour will increase the bacteria in your ear by 700 times.

If the U.S. government has no knowledge of aliens, then why does Title 14, Section 1211 of the Code of Federal Regulations, implemented on July 16, 1969, make it illegal for U.S. citizens to have any contact with extraterrestrials or their vehicles?

The cigarette lighter was invented before the match.

Thirty-five percent of the people who use personal ads for dating are already married.

A duck's quack doesn't echo, and no one knows why.

23% of all photocopier faults worldwide are caused by people sitting on them and photocopying their buttocks (ягодицы).

The king of hearts is the only king without a moustache.

American Airlines saved $40,000 in 1987 by eliminating 1 olive from each salad served in first-class.

Venus is the only planet that rotates clockwise.

Apples, not caffeine, are more efficient at waking you up in the morning.

The first owner of the Marlboro Company died of lung cancer.

Michael Jordan makes more money from Nike annually than all of the Nike factory workers in Malaysia combined.

All US Presidents have worn glasses. Some just didn't like being seen wearing them in public.

Walt Disney was afraid of mice.

The three most valuable brand names on earth Marlboro, Coca Cola, and Budweiser, in that order.

It is possible to lead a cow upstairs...but not downstairs.