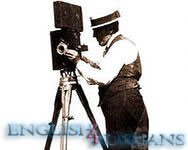 Cinema was born at the end of the 19th century. The first people who showed the first movies to a paying public were the Lumiere Brothers. They did this in Paris on the 20th February 1896.

The first films showed moving people and transport or newsreels of wars, short comedies. The first dramatic film, The story of a Crime, was produced in France in 1901.

At first, films were shown anywhere: in music halls, clubs and shops. Special film theatres were built in 1908. The Russian film industry was going its own way. It produced some great films: The Queen of Spades (1916), Father Sergius (1918) and others.

Warner Brothers in Hollywood made the first film where an actor sang and spoke in 1927. The film was called Jazz Singer. The first one hundred percent sound film, Lights of New York, appeared in 1928. The first colour films were made in the 1930s, but the black-and-white films are made even today.

Cinema is a popular art nowadays, but television and videos influence the popularity of it. There are many famous directors, actors and actresses now. For example: O’Konnor, Mihalkov, Bus Villis, Roberts, Menshov and others. There are some cinemas in our town: “Oka”, “Moscow”, “Rodina”, “Friendship”. I’m not a cinema-goer, but sometimes I like to go to see an interesting film, even if it does not create so festive atmosphere. I like different comedies, but sometimes I see different love-stories. Once I saw the famous “Gone with the Wind”. It is based on one novel by Margaret Mitchell. This novel was produced in the 1930s, but it is actual nowadays. The English actress Vivien Leigh played the main role.

I think, the cinema is an inseparable part of our lives.